ABC Quick Check: B is for Brakes

- May 02, 2020
The “ABC Quick Check” is a phrase to help you remember how to check your bike for safety and mechanical soundness. In the previous post, we discussed the important of Air in your tires, and how to maintain it. In this post, we cover the next letter.


B is for Brakes

Good brakes are important. If your brakes are only partially functional, you may not be able to stop in time in an emergency situation. You cannot ride safely at any kind of practical speed without working brakes.

Many kids with BMX bikes remove the brakes from them. We think this is a bad idea. It renders the bike unsafe for any riding beyond trick riding in the bike/skate park. You need to have more than "sneaker brakes" when that car is pulling out in front of you!

Basic check: Stand beside the bike and apply each brake in turn while you push it forward. The brake should hold well enough to prevent the wheel from turning. The left brake lever operates the front brake, the right lever operates the rear brake. (Remember both "right" and "rear" start with "R".)

"Hand brakes" (operated by levers on the handlebars) have two major variations, and a few lesser used ones. The major types are "rim brakes", in which a brake pad is applied to the outer rim of the wheel, and "disc brakes", in which a set of pads squeeze together on a disc attached to the hub.

Rim brakes may be "linear-pull", pictured here, as well as "caliper" and "cantilever". Linear-pull are most often used on hybrid bikes, calipers on road bikes, and cantilevers on mountain bikes. But they all work on the same principle, to squeeze rubber pads against the wheel rim.

In all cases, your hand brakes should provide plenty of stopping power well before the brake lever gets close to the handlebar. If you're not getting that, or if the brake lever gets closer than an inch to the handlebar, your brakes need work. Working on your own brakes is beyond the scope of this post, but there are plenty of online videos if you are a DIY person, or you can take the bike to your local bike shop.

In the case of rim brakes, you can also evaluate the wear of the brake pad. Have you ever noticed these little indentations in a brake pad?

These are there to indicate how worn the brake pad is. If the pad is worn down to the bottom of these ridges, then it's time to replace the pad. You may also hear a scraping sound when you apply the brake. Also replace the pad if it is so old that the rubber has hardened. That will not grip well enough.

Bikes for small children, and some adult cruiser bikes, may have the so-called "pedal backwards brake", officially called a coaster brake. You can tell because it has a metal arm that extends from the rear axle and attaches back to the frame. Pedaling backwards applies the brake. If a coaster brake does not work, it's probably installed incorrectly, and you should take it to a bike shop to be looked at.

Does it make a difference which brake you use, front or back? Some people are afraid of the front brake, because of the possibility of pitching forward over the handlebars. On the other hand (no pun intended), the front brake actually has more stopping power. That's because as you slow down, your center of gravity moves forward, and that puts more weight on the front wheel and less on the back. And that's also why suddenly using only the rear brake makes you skid. That may be fun to do if you're a kid with a coaster brake, but it's also not a very controlled way to stop.

Using only the rear brake is the weakest way to stop, takes the most distance, and risks losing control from skidding if you do it too quickly. Using the front brake only gives better stopping power, but also carries the most risk of going over the bars. The very best braking power, in the shortest distance, actually comes from using both brakes together, more or less equally, and carries somewhat less risk of going over the bars.

So what about that? The secret to not going over the handlebars is to lean back, to keep the center of gravity from moving too far forward. If you're braking gradually on a level surface, it's generally not a problem, if you just make an effort to keep your weight back. If you have to brake quickly in an emergency, or if you are braking going downhill, a more drastic change of position is needed. Stand up slightly off the seat and crouch as far back as possible, keeping your own center of gravity low. Try to get your butt behind the seat, and down. Doing this quickly is an emergency maneuver taught in bike classes, but you can practice it on your own, preferably in an empty parking lot, and wearing a helmet.


It's very much worth mentioning, however, that the need for an emergency maneuver can be greatly lessened by being aware of your surroundings, to avoid any last second surprises. Practice braking gradually when you know a stop is coming up.

Popular posts from this blog

Five Layers of Bike Safety: Tying it All Together 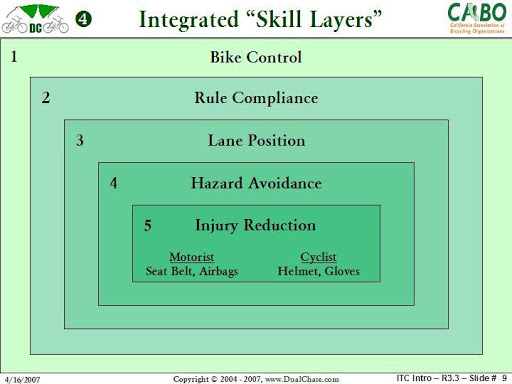 This will be my last post on this blog. It was conceived in the early stages of the Covid pandemic, April 2020, in response to seeing so many new people out on bikes, so early in the season (for Maine). The goal was to provide basic should-know information to people who may be taking up biking for the first time as adults, or in a long time, or ever. I hope that it  has accomplished that.I think that I have covered the basics now, and I'll wrap it all up with a concept known as the Five Layers of Bicycle Safety. This concept was developed by Dan Gutierrez, a bicycle safety educator in California. For this post, I will present each of his slides, with commentary by Mighk Wilson, another long-time bicycle educator, a transportation planner, lifelong cyclist, and co-creator of CyclingSavvy.
The Five Layers of Bicycle Safety
In Dan's words, "The important talking point about this diagram is that the layers are cumulative and build upon each other, with the first 4 to eliminat…
Read more

Today, in honor of our nation's Independence Day, I'd like to take a break from the more usual safety topics that this blog typically presents, and write a more personal reflection on personal independence and freedom of travel.
My Cycling Journey I am primarily a transportation bicyclist. I do sometimes to take longer recreational rides, and last summer I did a week long 320-mile bicycle trip to New York State, "unsupported" (unaccompanied by any support vehicle, just me and my bike). But mainly, I just pedal 11 miles round trip each weekday to work and back (before the pandemic), and anywhere else I need to go for meetings and errands in the Portland region.

I'd always seen bicycling for transportation as a desirable option from both the environmental and fitness standpoint, but it never seemed feasible for me until 2002, when our family moved to Westbrook, only about 5 miles from my office near the Maine Mall. I checked out the bus system, and discovered that…
Read more

5 Reasons You Should Never Ride Against Traffic 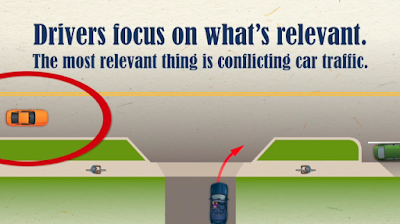 But first, a word about where to ride:Path vs. Road? Many people prefer to ride on paths, because cars. Understandable. But in my opinion, riding in the road is the medically safer option for everyone during this pandemic time. Even in normal times, paths can be pretty crowded, and more so now that exercise is one of the few socially acceptable reasons to leave the house. Can you always keep proper distance on a path? At bicycle speed? It can be difficult. On the road, you have plenty of room to keep your distance from any other people you may encounter outside of cars. And you'll be leaving a bit more space on the multi-use paths for the pedestrians.

But what about those cars? We'll talk more about how to keep a safe space around you on the road in later posts, or you can skip right to the chase here. But now, on to our featured topic: WHY DO WE WALK AGAINST TRAFFIC, BUT BICYCLE WITH? Riding against traffic is one of the most common mistakes that many beginning bicyclists make.…
Read more

John
I have been bicycling nearly every weekday, year-round, since 2002. I bike to work (or at least I did, before the pandemic which now has me working from home), for other transportation, and sometimes for recreation, usually alone but occasionally with others (in the “before time”). Over the years, I have learned quite a bit about safety, first on my own, then as a student of formal courses, then becoming certified to teach for the various local and national organizations. I also have presented regularly at a local driving school, on the topic of driving around bicyclists and bicyclists’ road rights. I have picked up enough mechanical skills to get me by on the basics, but for anything beyond fixing a flat tire and giving you a verbal evaluation, I will send you to your local bicycle shop, where knowledgeable salespeople and professional mechanics can help you out. My profile picture was taken of me in July 2019, by my good friend Don Straight, on the occasion of my 300-mile cycling trek back to my hometown of Massena NY, for our 35th year high school reunion. But do not fear, I only wear “bike clothes” for long rides!